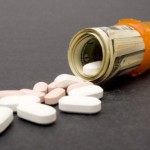 This is a bit of a tricky one.

No, insurance companies don’t arbitrarily increase health insurance premiums when you’re prescribed certain drugs…but your rates will usually go up if you’re taking regular, expensive medications, especially your prescription drug coverage. Certain medications that are used long-term, such as blood pressure meds, blood thinners, anti-depressants, hormone supplements and drugs which combat other chronic conditions will cause your prescription drug insurance to go up. The reason for this is because, frankly, you’re using it more than most people.

Group health insurance is based on spreading the “risk” around as much as possible, ostensibly allowing these kinds of policies to offer lower rates. Theoretically, most people are generally healthy and won’t use their insurance much—but they still pay their premiums into the group pool. When a few people out of the group do present serious illness or injury and actually use their coverage, it is balanced out by the non-frequent-users. This won’t go on forever, though, especially in the cases of those with long-term problems with mounting medical bills. That’s why insurers build in spending limits, so that way the few very sick won’t overly burden those who aren’t. This also keeps those runaway costs from eating too much into insurers’ profit margin.

Those with serious health problems or who have ongoing needs such as for expensive prescription drugs will end up paying more for their insurance premiums because of this. Their risk is upgraded by the insurer and thus the premiums rise. New health care regulations will make it mandatory for certain high-cost medications to be pre-authorized before they can be prescribed to help keep drug costs down in group health policies.

Prescription drugs are one of the most expensive parts of health care. Drug companies develop and patent medications and then allow them to be sold at extremely high rates. The actual cost to manufacture most prescription drugs is very low, but the companies are free to charge what they want to, and they do—especially if it’s a truly miraculous breakthrough drug. They market their medicines directly to physicians and hospitals to increase their sales, and they discourage generic drugs because they are so inexpensive to manufacture.

A good example of this outrageous markup is on antibiotics. The popular broad-spectrum antibiotic Zithromax is extremely expensive when purchased under its brand-name, but a generic prescription of the same drug formula, without the advertising, packaging and which is manufactured by another company sells for pennies on the dollar in comparison. However, many very important drugs aren’t available in generics for just this reason: the companies patent their formulations and protect them fiercely.

So, if you take expensive drugs your insurance will go up. People who have to take these kinds of medications either long-term or because of a certain illness such as cancer will have other medical problems that the drugs are used to treat; therefore, the person has a higher average medical care cost than “normal” people. But just because you take an anti-depressant or a cholesterol control drug your premiums won’t go up.

I wrote last week about Charlie Sheen and how his life has unraveled because of his addictions. We had a guest speaker come to a work meeting today to talk … Continued

In a major paradigm shift in mental health care, American psychologists are formally asking for the ability to prescribe psychotropic drugs for the mentally ill patients under their care. Considering … Continued

After a fabulous day of skiing, I brought my sore body home and discovered that I had the sniffles. Not just being out in the cold sniffles, but the “I … Continued

Well, my friends, sorry to burst this bubble for you, but, no. Many people labor under this common misconception, most likely because that’s the way it often works with auto … Continued

A diagnosis of diabetes can mean a lifetime of finger-prick blood tests and insulin injections.  There is also a regime of doctor’s appointments and nutritionists’ visits to make.  In addition, … Continued