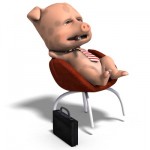 Is there a reason for health insurance companies being non-profit, tax breaks?

Until very recently, I didn’t even realize that there was such a thing as a non-profit insurance company. I did some research on the subject, and found out that, actually, the majority of insurers with over 100,000 members in the United States are not-for-profit ventures: 84 companies out of a total of 138 insurance companies, or 61%. Amazing!

But what does it mean, if an insurer is non-profit? When you think of the term “non-profit” you think of things such as churches and charities, not insurance companies. Far from it. The difference is in the way you are thinking. Non-profit insurance companies are, normally, co-operatives, meaning they’re basically owned by the members, although there are, of course, those in authority who direct the co-op’s efforts.

What’s a co-op? It’s basically an association of people who are bound by a common interest. If you bank at a credit union or get your electric power from a rural agency, you’re in a co-op. They’re ways for people to get things done, and as long as they adhere to certain rules and regulations, they can be deemed not-for-profit, and that means that the savings on taxes and in other areas can be passed on to the members of the association in the form of lower fees, payments, etc.

Health insurance started out in the U.S. as a co-op. Blue Cross insurance was founded as a non-profit insurer for teachers in Texas in 1929, and Blue Shield was founded in the same manner for miners and lumber workers in the Northwest. Both of these companies gave managed care by local doctors, but the members had power. Many of the 84 non-profit insurance companies still have Blue Cross or Blue Shield or both in their names, though they’re state associations, operating separately from the now for-profit Blue Cross/Blue Shield corporation.

I suppose the biggest reason to be a non-profit corporation would be the benefits of the tax breaks. Theoretically, the money not spent in payments to Uncle Sam can be diverted into reducing overhead costs for the company and lowering premiums for members. Quite often, this does actually work out.

However, all is not sunshine and roses. It’s been discussed that health care co-ops are a solution to the modern day health insurance crisis; they’re a crucial part of the Obama reforms. While non-profit programs have their benefits, they don’t foster competition and they are prone to failure, given the fact that they don’t have the financial stability that for-profit companies have. Also, non-profit regulations are a fine line to walk, and many a co-op has gone south by having someone in power who missteps or puts company money where it shouldn’t have gone…such as in their pockets.

So yes, tax breaks are the biggest reason for a company to be non-profit for health insurance, aside from the noble intentions stated by the association. While those noble intentions are often quite true, sometimes things happen and little things like intentions can get lost in the shuffle.

Finding the right health insurance can be a chore. There are a lot of factors to look into when you are picking the company that is right for your situation … Continued

Despite assurances to the contrary, President Barack Obama once again dismissed efforts by Republican congressional investigators who were attempting to gain access to data important to the inner workings of … Continued

With the passage of the Patient Protection and Affordable Care Act of 2010, all states have been faced with modifying their insurance regulations to comply with the requirements of federal … Continued

What exactly is “universal health care?” With the new health reforms taking place and being debated and protested all across the country, it’s hard for the ordinary person to make … Continued