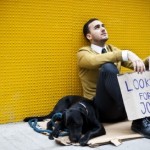 Michigan has been hit very hard by the economic recession. This state has a high percentage of workers whose jobs are devoted to manufacturing and other kids of labor which saw massive layoffs and job cuts in recent years. The result? Thousands of jobless workers, and thousands of jobless workers having to ask for unemployment benefits from the state. Unemployment in Michigan is well above the national average, and the state has spent its entire unemployment trust fund, and still fallen short. The state has had to borrow from the federal government to cover the shortfall, leaving Michigan with a $3.9 billion debt, $117 million of which is due in September 2011, and is running a budget deficit in the billions.

What do I think of the whole thing?

Well, like any of these issues, I think it stinks, all around, for everyone. On one hand, you have the workers, who were laid off through no fault of their own. On the other, you have the employers, the businesses who do stuff which create jobs. Both sides have valid complaints and arguments, and both sides are right. There’s no wrong here, unfortunately, no one to point the finger at as the culprit to make things easier. It’s a Gordian knot, it’s an issue for Solomon, and unfortunately, just like those historical examples, it requires a painful cut.

Take the workers. They live in a state with an extremely high unemployment rate, and what does a high unemployment rate indicate? A dearth of jobs. What other option do those workers have? Either pick up and leave the state in search of greener pastures, or apply for unemployment insurance and keep on searching for jobs. Now, they have 6 weeks less to accomplish that, and as one who has been laid off and had to look for work before, I know how hard that can be. Dang near impossible, sometimes. Why should someone have to leave their family and friends, leave their homes? What if they can’t do that, because they can’t afford to? Where does that leave them?

When you’re out of work, you cling to any hope. Hope is like your daily bread, and you have to have it, or you’ll be consumed by depression. Every day you scan those want ads, you polish your resume, you call and ask around, you follow rumors and tips, all trying to find that elusive job. If you have to, eventually you will take something inferior, if only to be able to say you have a job, and will keep looking for something better in the meantime. You hate being on unemployment; it’s degrading, and the limitations it places you under are stifling. But if it’s your only option, you’re still grateful for that. It keeps you going, until the hope finally pays off, and you get that job you were waiting for, dreaming of, pursuing. Sometimes that process of dreaming and searching takes longer than you’d like.

But what happens when you get less? All I can say is, I really, truly hope the Governor’s tactic pays off.

Michigan businesses need something to give them a shot in the arm. Perhaps a smaller unemployment tax burden would allow them to put more money into growth and development, which leads to job creation. Maybe it could be a good thing for the economy as a whole, because everyone knows that in order to stimulate the economy, businesses have to be able to flourish. Whether you believe in trickle-down economics or not, it does happen: growth comes from infusions of capital, and businesses generally do have the good of their employees in mind. Layoffs aren’t easy for anyone involved. A person loses their job, but a company loses someone who performed a valuable function, and the company has to learn how to make do with less. It’s a tough problem.

Michigan isn’t alone in this method of addressing this issue in this manner; Florida has done the same. The cuts will begin in January of 2012, which gives the states the majority of a year’s time to continue their economic recovery. Hopefully, by the time Michigan’s unemployment insurance period is cut, they’ll have fewer unemployed workers to cover.

We can always cross our fingers and pray it works out that way.

With the passage of the Patient Protection and Affordable Care Act of 2010, all states have been faced with modifying their insurance regulations to comply with the requirements of federal … Continued

The easiest way to find affordable health insurance is usually through a group policy provided by an employer. People who had health insurance with a previous employer can usually keep … Continued

The Retirement Planning Group (RPG), a consulting firm which works with individuals and companies regarding retirement and insurance planning, recently published a release addressing many common incorrect assumptions in relation … Continued

Now you have landed your job. The key is to hang on to it for dear life. The recession has sparked many lay offs that has landed career veterans without … Continued

The numbers of the uninsured in the U.S. have continued to increase, most likely in relation to the economic climate’s wave of unemployment. The results of a survey put out … Continued